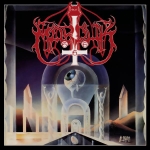 25 years after the original release and five years after the re-release of MARDUK’s debut Century Media are doing it again. Re-releasing albums every five years seems to be an absolute winner of a business idea. Especially when it comes to an album like "Dark Endless", which has been published just under 30 times in different versions over all the years. This time the following reasons to buy are included: two digipaks, including fold-out poster (of the album cover) and sticker set (featuring both cover artworks and one of the pentagram with the incorparated wolf – Frank), liner notes by the band and a bonus CD with the "Here’s No Peace" demo (featuring original artwork by Per "Dead" Ohlin). Both album and demo have been remastered by the master of re-master, Patrick W. Engel, who did, like always, a good job by improving the sound without loosing the primary vibe of the songs. Upps, just forgot the most important thing, the music. "Dark Endless" could not impress me way back in the early nineties and it does not 25 years later. With the knowledge of what MARDUK have become afterwards one does surely recognize elements which later on became trademarks of MARDUK. So in total the album is only of interest for MARDUK fans, same goes for this CD boxset and the four different 25th anniversary vinyl editions. See you in five years! www.facebook.com/mardukofficial, www.centurymedia.com