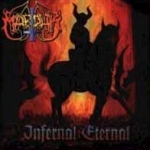 It’s hard to believe that MARDUK has been waging war upon Christianity and humankind for a decade now! "Infernal Eternal" is by no means an epitaph but a bold declaration of further assault. Cataloguing their ten year history, MARDUK cull songs from all their releases for their live repertoire. Where as their other live album "Live In Germania" was more or less an attempt to remedy the god awful productions that hampered their first 3 (especially their second and third) albums, "Infernal Eternal" is that oft spoken of fist in the face of god. The production is powerful, clear, raw and crushing! Delivering some of the most horrendous blasphemy known to mankind, MARDUK rip their way through this double CD with surgical (and dare I say military) precision. A Black Metal band releasing two live albums may seem something of a con in many ways but this particular live album is definitely worth your hard earned pennies as there has been an obvious effort put into the presentation of this album. Complete with lyrics for all the songs, the booklet also sports many live photos of these sulphur souls. The only complaint I would have overall is that Legion’s vocals tend to sometimes be a little broken and crackle a bit here and there. But I guess that’s what happens when spend most of your years belting out Christ raping Black Metal with MARDUK’s velocity and intensity.