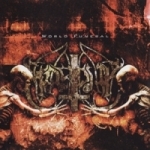 “La Grande Dance Macabre” was at least in my opinion a relatively disappointing album after the fantastic brutal “Panzer Division” masterpiece. Now the Swedish Black Metal flagship attacks once again with their newest album “World Funeral”. As soon as the aggressive opener ‘With Satan And Victorious Weapons’ shoots out of the speakers it is obvious that “World Funeral” is not as boring and limp as its predecessor. The only thing I do not like is the clinical and sterile sound, once again created by Peter Tägtgren which does not reach the qualitative high level of “Panzer Division”, a problem “World Funeral” shares with “La Grande Dance…”. The other weakness of MARDUK’s newest assault are the slow songs – they are not heavy or dark, except ‘Bloodletting’ and the melodic ‘Castrum Doloris’, they are fucking boring! Fortunately fast blasting stuff dominates “World Funeral” and Songs like ‘Cloven Hoof’, ‘Night Of The Long Knives’ or the sinister ‘Hearse’ are really good and almost as intense as the hateful “Panzer Division” material. Although over the years MARDUK have lost a lot of the fascination they certainly had until their massive Live-presence, their almost funny shows and a weak release like “La Grande Dance…” ruined it. “World Funeral” is a step into the right direction, because it shows that musically MARDUK have not totally wimped out and lost their creative potential, but success has made them less interesting. To me Black Metal is a young, provocative and uncompromising music and MARDUK are meanwhile much too experienced to be as hateful, raw and intense as the young bands in the underground are. In terms of routine and skill MARDUK are certainly still one of the leading bands in the genre, but if you want honest and heartfelt Black Metal feeling, check out ARMAGEDDA, SUMMON, BLACK WITCHERY or WIND OF THE BLACK MOUNTAINS, because those bands have the spirit MARDUK also had in their early days. Personally I certainly owe respect to MARDUK, because I praised them in my early Black Metal days and one must not forget, that the Swedish horde has released eight(!!!) official albums, which is not typical for this genre. Well, I have talked enough about this band now, “World Funeral” is a good album, check it out and buy it if you like! Band’s website: www.marduk.nu Label’s website: www.regainrecords.com