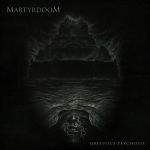 This is the debut album of this Polish Doom / Death Metal band. There is an obvious indication of what you are about to listen to in the cover art, title and name of the band. This is a return to the good old times of Doom / Death Metal with a strong reference to AUTOPSY, early MY DYING BRIDE and PARADISE LOST. If maybe I might say that the band is actually playing with more “finesse” if the expression works. Also, there are quite a bit of faster parts where the band has a slight sound reminding of early ENTOMBED, maybe for the guitar tone, but anyway they do add a lot in the overall atmosphere of the band. The vocalist does a quite competent job, using a vocal style similar to that one of OBITUARY, maybe a bit less powerful, but it also can be used as another reference for influence. Yes, the overall sound and experience totally recalls that 90s feeling and with a song titled ‘Oldschool Death’ it cannot be any other way. More than once I was thinking “Hey, that riff sounds like MORGOTH…” and the references are never-ending. And yet the band takes it and adds their very own touch. Songs like ‘Lucifer Rise’ are the kind of incantations I do like to listen to when I want my Death Metal to be Doomed! The riffs! Of course there are also some touches of MORBID ANGEL and early DEATH here and there. All those band names were the best of the best back in the day and MARTYRDOOM is doing no wrong in reviving sounds that not even those bands can carry on. Even if the production is very good and heavy, and the performance seems also quite impeccable, one can sense that this is just an early work of a band. That means that a very dark and gloomy future is ahead. In my personal point of view, although they do it very well in the slow mode, they play very good at thrashing speed. Old school Death Metallers, this is essential! www.facebook.com/martyrdoomdeath, www.memento-mori.es

Julián “ Face Without A Person” Núñez

Julián “ Face Without A Person” Núñez