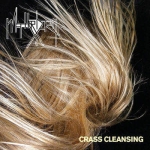 The Swiss three piece MATTERHORN (named after the country’s most famous mountain) is a band that seems to make it easy to the listener at first glance. Hailing from Switzerland, being a three piece with a singing guitar player, a voice that sounds pretty much like Tom Warrior and riffs and beats that remind of these guys (not too) early creative works. Why not file MATTERHORN under CELTIC FROST clones? The answer is simple: this is way too short-sighted! Of course CELTIC FROST is the major influence on MATTERHORN. But if you listen just a little closer to their first output “Crass Cleansing”, you’ll discover some more influences of that era of the mid to late 1980s. The first song after the strange intro ‘Diptyque’ is already a first hint on this, since ‘Violent Success’ might start off like a forgotten FROST song, but surprises with a Hardcore styled shout chorus in the end and I somehow thought of LETHAL AGGRESSION. These choruses are a recurring element in the sound of MATTERHORN, by the way. And the following ‘Noch Nicht Nichts’ has some strange breaks that reminded me of VOIVOD and a few more classic Metal riffs as well. While ‘Teenage Emperors’ and especially ‘Parabol Dreams’ really walk a FROSTy path, ‘The Hornhead’ is another surprising tune. Again we find breaks in a style similar to the mighty VOIVOD, but in the long run, there are awry rhythms that somehow reminded me of the only real album of BLIND ILLUSION (“The Sane Asylum”), or late stuff from Canadian oddballs D.B.C.. With ‘Tongues Of Babel’, we maybe have the best song CELTIC FROST forgot to write for “Morbid Tales”, which is nothing less than a great compliment from my mouth (or pen). In the end, ‘Of All I Was’ is a very break laden song full of turns and speed changes that just ends a very cool album worthy. MATTERHORN maybe took the legacy of early CELTIC FROST, but they manage this inheritance in a unique way. The album “Crass Cleansing” is available in a digital format from the bandcamp site of MATTERHORN (matterhorn.bandcamp.com) as well as on physical copies, thankfully also on vinyl, through Iron Bonehead, who are responsible for the CD version. If you need more info, visit the band at www.crass-cleansing.com or www.facebook.com/crasscleansing