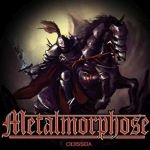 Since returning with the live album “Odisseia”, the legendary METALMORPHOSE has not stopped working. As after that reincarnation, this classic and pioneering group from Rio has released around 9 works, including compilations, live, DVDs and of course timeless classic albums like, “Máquina Dos Sentidos” and “Fúria Dos Elementos”. Now, let’s look back at this live commemorative edition, that was recorded in 2009, at the Odisseia Theatre in Rio de Janeiro, Brazil; when METALMORPHOSE met with its original formation for an anthological presentation. The story of METALMORPHOSE is too rich and extensive to sum up in a simple journalistic text – as let alone considering a piece of historic past. This live album marked the 25th anniversary of the “Ultimatum” split with DORSAL ATLÂNTICA in 1985, which was not only the debut release by METALMORPHOSE, which formed in 1983, but also, it was one of the first Heavy Metal LPs in Brazil (together with KARISMA, STRESS and SP Metal). And these early days showed the band rather unimpressed by the already rolling Thrash Metal machine. Instead, the 14 songs released on “Odisseia” present they were more deeply rooted in traditional and raw NWOBHM stuff, and only played for fans of that classic period. 13 live tracks are included in this album along with a bonus track from 2009 (studio version), covering a length close to 80 minutes. Without any doubt the band was successful to record it in high quality audio and would not need massive expertise to recognize that it retained the excellent acoustic of the Odisseia Theatre. This fantastic advantage makes the whole listening a very connected experience and in the right mood, the listener will definitely be transported right into the venue, and finds itself among whirling hairs, throwing fists towards the band with each energetic and spirited old and new track that comes along. These are the original recordings with no additional overdubs, that show the band still in great shape, in a show that brought the band back after 25 years of absence. The flowing rhythm section formed by André Delacroix on drums, the deep warm presence of André Bighinzoli on bass and the effortless and magnetic guitars partnership by Celso Suckow and Marcelo Ferreira, charged forward by the totally engaging vocal deliverance (in his enigmatic native tongue) by Tavinho Godoy altogether established the spirited bonding and prodigiousness of the band; which will be evident on each track, especially on ‘Harpya‘, ‘Maldição’, ‘Correntes’, ‘Não Quero Ouvir Você’, ‘Minha Droga É Metal’, ‘A Esperança Nunca Morre’ and the enthralling cover of ‘Battle Hymn’ (MANOWAR). Pressed with an empowering album cover and being released simultaneously in Europe by the Metal Soldiers label and in Brazil by the Urubuz (RJ) and Encore Records (SP) labels, “Odisseia” embodies the ‘Long Live Metal’ spirit. Those who are into the band and all those unaware, that want to know more about the origins of Brazilian Heavy Metal should check this out for sure. And gem hunters as well as Metal historians, as it has a sentimental and historical value. Explore more about the band at www.facebook.com/metalmorphose and visit label page www.facebook.com/urubuzrecords.