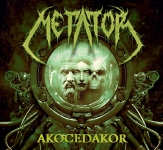 METATOR’s “Akocedakor” is a grossly overlooked album in my opinion. Originally released digitally in 2019, this is now being given a fresh lease of life by Blood Fire Death who signed METATOR to relaunch their debut. The band is a two piece and focuses on absolute brutality over everything. The riffs barrage one after the other in a constant attack. They’re chuggy and are bloody relentless, razor sharp, heavy and merciless throughout the entire album. The leads are an absolute treat throughout the album, standout tracks are ‘The Unexpected Beauty Of Deformity’, ‘Suprema Agonia’ and ‘Kannabykon’. The band wraps the solos around intensely heavy riffs suffocating the listener. The drums are mostly in the background but provide sufficient ammunition to fill in the gaps and still not drown the rest of the sonic attack. There is an overall element of a subtle melodic synth like layer in the background which gently envelopes the sound making it a treat. I suppose musically alone this band is a complete feast. The vocals are either standard wave form squeals that go on throughout the album or they’re just harsh screeches. In fact at some places, they sound like what you’d hear on blackened Death Metal releases. Frankly, they fit into the music quite well however I’d have loved some variation. Throwing in some deep guttural passages here and there would’ve bumped this up to the next level! On the whole the album genuinely surpasses general expectations in terms of sonic quality. It isn’t a brand new life to Deathgrind, however it is a delightful descent. I genuinely hope this issue reaches a larger audience because this band surely needs to be known. METATOR’s brand of relentless approach definitely demands better appreciation in my opinion and finally the MOTÖRHEAD cover ‘Bomber’ is tastefully done! Definitely recommended! For more information please visit www.facebook.com/metator-2108412322733877