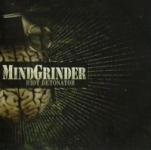 I am sure I have written something like this before, but an album does often need one or two songs that make an impact in order to bother to play the album again. “Riot Detonator” has more than two tracks, but sadly they don’t occur until the ‘Epiloge’ is done and farewell. ‘Hellfire’, ‘Concept Of Honesty’ and ‘Death’s Disciples’ can be regarded as the hellish threesome on this brutal album. Personally I like this way of brutalism compared to the more common American aggressive brutalism. Mindgrinder’s way of being brutal is more bombastic and in-my-face. ‘The Rebellion’ and ‘Transition’ do nothing else than annoying me. In a way these two tracks are closer to Rock’n’Roll with a Death Metal sound, but in my book that counts less, or actually counts on the minus-side of the scale. These two are sloppy, and it’s with great relief that ‘Epilogue’ sets in. OK, the chorus on ‘Transition’ is cool, but that doesn’t save the whole track. The big keys on ‘Hellfire’ set the atmosphere, and it surely creates an atmosphere of being in hell. Especially after 45 seconds. ‘Concept Of Honesty’ has a militaristic attitude that steps all over me. It’s fucking brutal! However, it’s with ‘Death’s Disciples’ that Mindgrinder brings forth my smile. Not since “Blessed Are The Sick” (Morbid Angel) have I heard such a mighty riff combined with Death Metal. Could easily have been David Vincent on vocals on this track, being this close to the actual track ‘Blessed Are The Sick’. Great thing, Mindgrinder. Sadly this doesn’t save the album from being a tad boring in between. Half the album is really fine, while the other half lacks something. Well, Mindgrinder is anyway onto something, and despite the lack of development (in my opinion of corpse), I am sure they will hit harder next time around. www.mindgrinder.com