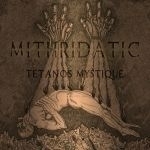 Three years after their impressive debut full-length, “Miserable Miracle“, MITHRIDATIC returned with a grim, sick and twisted new album “Tetanos Mystique”, again mixed and mastered by Francis Caste at Sainte Marthe studio (SINSANEUM, ARKHON INFAUSTUS, DEHUMAN). This new record of the French extreme Metallers was crafted to become an ultra brutal whipping attack for die hard fanatics, merging Black Metal and Death Metal. MITHRIDATIC are devastating and jarring, songs like ‘The Dead Mountain Of Life’, ‘Phosphenes Aura’ and ‘Toothless Bite’ have an unrelenting pace and some great moments and there are songs like ‘Lotophagus (Lotus Eaters’ Dream)’, ‘The Night Torn From Herself’ and ‘Le Sevrage’, ‘Tetanos Mystique’ which keep the pressure on with technicality without getting too repetitive. ‘God’s Blindspot’ which starts off the album, sounds a little chuckle, because the band seriously used the sound effect of a bong as an intro that’s just being lit and pulled through. But soon after that is over, the band throws out a blitzkrieg of an ultra brutal mix of Black and Death, which could be called the acoustic wall of death. Throughout the album, MITHRIDATIC delivered a performance that is variable and multi-layered, with less background atmosphere than on earlier albums; they utilize sampling and structure to help set the overall tone instead. One thing that hasn’t changed though is the face melting guitar solo work peppered throughout the madness. With layering, density, and intensity that persists, this is a solid as hell release full of technical prowess and morbid curiosities; absolutely darker and grittier than the band’s first album, but also tighter and with leaner song lengths as a result, “Tetanos Mystique” contains 37 minutes of material that hits hard with less of a focus on blackened swarming riffs and a bit more on the technical side. Here, admirable work of guitarists, singer and drummer, weave strange canvases that capture the listener and never let go. In recent times, some of the most consistently wicked underground Metal was delivered from the XenoKorp camp, and the new MITHRIDATIC opus is no exception. It explores some sinister subject matter on this album, dealing with abuse, mental illness, and the strange history of deliberately infecting one’s self with Tetanus (Clostridium tetani) to dive into a feverish delirium for inspiration; no matter how it’s perceived proves to be a delirious voyage of human experience. Based on books by Roger Gilbert Lecomte, Louis-Ferdinand Celine, Charles Bukowski, and album artwork by Florian Deville; the music inside “Tetanos Mystique” is extreme and dark that borrows from both literature and nauseating extreme Metal, which should be explored by all the fanatics of the respective genres and experience everything it’s reverberating. Explore more about the band at www.facebook.com/mithridatic, and visit their label page: www.xenokorp.com.