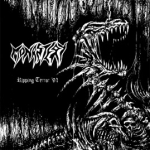 Back in the days when Metal still was real, three young Death Metal bands were touring Europe, one Swedish named ENTOMBED, one Dutch named SINISTER and one Austrian named DISHARMONIC ORCHESTRA. All three bands are still active and they all still play Death Metal, well the last named band has progressed somewhat from their early days, and it has been a good while since they last released something, so let us concentrate on the two other bands. As when they all were touring, two Dutchmen and one Swede got a great idea, to get together and play some Grindcore infested Death Metal, and that was how MONASTERY was born. Ron Van Den Polder, Aad Kloosterwaard and Lars Rosenberg met up, wrote some tunes and recorded them during the tour, in Eindhoven, and hence the legendary "Ripping Terror" demo tape, which now has seen a CD release from Vic Records. Six tracks of ripping mayhem and violence was all it should be, unfortunately, as the material on "Ripping Terror" is quite slaying, and those six tracks have also been used on a couple of releases so far, but no further tracks were made. It is fierce, it is fast, it is precise and it has some heart, three young guys churning their brand of Death Metal infested Grindcore out to the masses, a good year after the genre defining "World Downfall" from TERRORIZER had hit the world. It is grinding, it is Death Metal it is Crust, it is a nice mixture of what was going on, on the European and American scene back then, and I can only imagine how great it would have become, if the guys had continued to work on the band, damn… Take in mind this release is just a demo, a first demo that is, from some guys who just got together and churned out some tunes, and recorded not that well rehearsed I guess, more of that please! Become ripped to shreds at: www.vicrecords.com