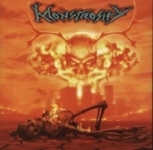 Thanks to the iron will of Lee Harrison, MONSTROSITY is still a reality in the new millennium (a fatal one?), and it is about time to offer us a double treat as "Enslaving The Masses" to remind us how seminal the band was these last ten years. Yes for sure this double CD is a rather special offering; CD one presents a compilation of promo / demo material covering among others the entire "Imperial Doom" track listing, while CD two is a live record mainly and logically focused on the most recent MONSTROSITY material, from the "In Dark Purity" album. On "Stages Of Decay", the band appear as a five piece, and I don’t know if this line-up is due to remain stable in the future, the band having been plagued by multiple changes in the past. Let me only say that these live recordings are faultless, all the tracks being perfectly played, with a special mention for Jason Avery’s excellent vocal performance and of course Harrison’s rather complex drumming parts. But the main interest of "Enslaving The Masses" lies in the "Crave The Blood" CD, because it documents the genesis of one of the most important album of the Death Metal genre, namely "Imperial Doom". Older readers may remember how much the band were not satisfied with the final mix released by Nuclear Blast, so here is the chance to hear alternate versions of five tracks from the "Imperial Doom" album, on which the guitars are more prominent. The real highlight of "Crave The Blood" is certainly the "Horror Infinity" promo / demo, on which MONSTROSITY appear almost thrashy with a very raw and primitive sound, reminiscent of the 80s. In fact, these fours tracks (redone from the "Imperial Doom" album) made me think of the earlier incarnation of MASTER. Impressive and ultra-violent stuff, especially with George "Corpsegrinder" Fischer spitting his hate with tormented screams instead of low growls. The CD ends with some sessions for the "Millennium" album, the songs sounding better here simply because they sound clearer and rawer, for a less calculated effect. All in all, I think it is obvious how much "Enslaving The Masses" is an essential buy, and I don’t feel the urge to say more. Buy then, and wait for the next MONSTROSITY album, planned for the beginning of 2002!