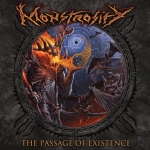 MONSTROSITY oh MONSTROSITY, why did we have to wait 11 years for a new album? All the great music you could have written, which you most likely have been doing anyways, recorded and released. Well, things doesn’t always pan out as intented, I reckon drummer extraordinaire and mainman behind MONSTROSITY, Lee Harrison will agree on that. Though the wait is over and the new album "The Passage Of Existence" has seen the light of day and has already caused me severe neck-damage. The last album released by the lads, was "Spiritual Apocalypse" from 2007 and the only change in the band since then, is the addition of a second guitar player in Matt Barnes, which might have brought along some more neo-classical guitar leads, as such have emerged here and there. Though the new album is still a quite natural successor of "Spiritual Apocalypse", as it of course is, just a damn long time after. The album has all the MONSTROSITY trademarks we all love: of course over the top drumming, great guitar riffs and a hell of a lot of the classic MONSTROSITY riffs that have been along all the way, from the first demos to the recording of "Imperial Doom", and it still gives us the hooking grooves and familiar feel. So far this is my least favorite MONSTROSITY album, though that might change over time, as the album grows and fades a tad with each listen, it is a tad strange right there, though I miss some more mid-paced bashing, the drums is in a strange place in the mix, and I miss a bit of power from them. The neo-classical guitar leads becomes a bit too much for me, here and there, and the bass is often also too hidden in the mix, for my likings. And then I’ve never been the biggest fan of Mike Hrubovcak’s growls. All the classic MONSTROSITY treats seasoned with a tad of progressiveness (for the sake of this band, that is), this album will make a lot of the old fans happy, bring in a good deal of new fans, and leave some of the old grumpy ones a tad off, but still a little happy as there are so many well known elements still left. The main riff, rhythm pattern and overall feel in ‘The Hive’, if that is marking the style of the next album, damn ;). Enter the final cremation: www.facebook.com/monstrosityofficial, www.metalblade.com