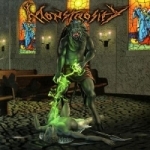 This is already the third time that "In Dark Purity" gets released now and as far as I’m concerned, it still hasn’t got the full attention it deserves! Back in their Nuclear Blast days MONSTROSITY already had to suffer from a lot of business bullshit, but when they signed to Metal Age Records for the European license of "In Dark Purity" everything became even worse. The guys behind Metal Age turned out to be the fuckers who used to run Turbo Records in the past and who not only ripped off several bands back then, but also got a lot of attention because of their involvement in neo Nazi bullshit! That resulted in a lot of boycotts, even though MONSTROSITY never had anything in common with that kind of ideology. Anyway, luckily Metal Age made a lot of contractual mistakes, so that MONSTROSITY could sign to The Plague / Hammerheart Records, who recently re-issued "In Dark Purity" as a fine digipak (this time even with a real booklet and the correct spelling of its songtitles)! Musically I hopefully won’t have to praise this record, have I? It is by far the best stuff the band has ever released and even blows away their classic debut "Imperial Doom"! Tight and really top notch musicianship, powerful production and absolutely not from this earth type killer songs! Brutal fast forward American Death Metal without any compromises and a lot of anger involved. Thirteen tracks plus an outstanding, totally devastating version of SLAYER’s all-time classic ‘Angel Of Death’! This is definitely a must-have album for everyone reading this! Buy or fucking die!!!!