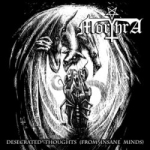 So Vic Records is digging again! Exhuming old Death Metal bands, to bring the sounds to a new generation or to a generation that wants to revive again those golden years. MORTHRA was a Death Metal band from the Netherlands, that was sounding like a mixture between a less brutal CANNIBAL CORPSE, less satanic DEICIDE, a less obscure INCANTATION and a less technical IMMOLATION with big doses of evil Thrash. Yes, a band of a lesser kind. But then again, something like this, a compilation and discography at the same time, must be approached for what it is: an exhibition of the works of a band in its formative stages. This has an obvious charm that only demo recording can have, and in fact in this case it is quite entertaining. Songs like ‘Tale By The Antichrist’ are good enough to be re-recorded on a proper album if the band was to continue. The first demo of the band is from 1991, and the last demo from 1993. There is a promo recorded in 1994 which seems to be the last thing they ever did. The evolution from recording to recording is noticeable, but mainly by having a better recording and obvious better playing skills, whilst the music style almost remains the same. It is with the last recording that the band started sounding more like evil Death Metal with less Thrash Metal touches, DEICIDE being the name that might be the more appropriate to compare the last creations of the band. Too bad they never crossed the line to record a full length as I am sure it would have been an enjoyable if maybe generic album. Still, this compilation works quite good for what it is, no matter the inclusion of some live tracks that although with a decent sound, just serve to put more music on the CD. www.facebook.com/pages/morthra/150084148527452, http://morthra.bandcamp.com, www.vicrecords.com