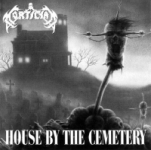 The first two releases by Death / Grind-with-a-drum-computer originators MORTICIAN now have been reissued and are an excellent opportunity for people who do not already own these CDs. "Mortal Massacre" even features a human drummer and since it is more Death Metal than primitive Death / Grind it is one of the more interesting releases by this "cult band". Whoever likes it brutal, primitive and heavy, digs damn long horror movie intros and ultra low vocals should check this out, I consider this band highly overrated and their later releases were a lot better, especially the "Chainsaw Dismemberment" and "Final Bloodbath Session" albums. In the early 90s MORTICIAN were incredibly extreme for that time and they certainly did something new, but I think their younger material has a little more substance and a much better sound than this. The band’s perseverance and unbreakable will deserve to be honoured, but musically they will always remain one of those love it or hate it acts. Additional infos, soundclips, etc are available here www.mortician.net and www.relapse.com.