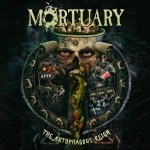 Good old French MORTUARY is at it again, they started making some real noise during the 90s, were a tad quiet during the 00s and have returned with a vengeance in this decade. The band is dealing with striking Death / Thrash with speed and a good punch, bordering groovy Deathcore here and there, swinging around with neckbreaking breaks, crazy drum patterns and progressive melodic leads. Though when the band is best, it sounds nostalgic and old school, it sounds a tad like when MALEVOLENT CREATION did their Death / Thrashy moshers on the two first albums. A full album of such would of course be boring, as it has been made to perfection by the masters, but as a backbone to the technical and modern shenanigans MORTUARY so greatly incorporate into their music, gives a fresh breath. The production is also quite nice, organic and leaving a lot of space for the instruments, so you easy can track the details going on, though once in a while it cramps up, when the vocals become too screamy and the music too Deathcore-ish, but otherwise it is sounding good and powerful. On top of the new intense Metal thrashing madness we are getting three re-recorded tracks from the band’s early demo days, a track from ’89, ’92 and ’94, and quite funny to hear how they are fitting into the contemporary universe of the band. Now I don’t know if they have been re-arranged as well, as I haven’t heard the originals, though the versions on this album, sound quite fine! Enter the slaughter of innocence: www.facebook.com/mortuarynancy, www.xenokorp.com