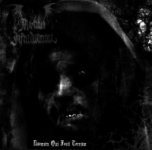 Sadly this is yet another Black Metal release that doesn’t really offer anything noteworthy. It’s not that it is bad or anything, it’s just that too many of this kind have tried to justify sales without really running the whole nine yards… which after all ain’t that long. I mean, if you don’t manage to create any sort of unique atmosphere, to come up with genuine riffs and / or get a sound that is your own, you better stay in your rehearsal room. Mortuus Infradaemoni consists of two guys known for their activities as drummers in the way better Lunar Aurora and one hired vocalist. If they weren’t good enough for that band, perhaps they should practice quite a lot, play in some other bands until the necessary skills are assimilated. Then they could’ve formed their own band. To me “Daemon Qui Fecit Terram” is, as said, just another Black Metal release in the huge pile of raw, dispiteous and adamant underground Black Metal albums that really do not offer anything else than just some new songtitles and bandnames. I rather stick to the remainders of the band these two drummers used to play for. www.cold-dimensions.de