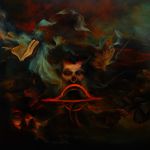 German outfit MORTUUS INFRADAEMONI includes two ex – members of the also German (and influential) band LUNAR AURORA. This may be a good sign of what to expect. Both Nataniel (guitars and vocals) and Profanatitas (drums, bass and vocals) actually incorporate some of their previous band’s sound into their style. The atmosphere of “Immortuos Sum” is amazingly immersive, taking the listener into an experience I can only describe as a pilgrimage into the unknown realms of darkness. The music is oppressive, raw and haunting. Their main source of inspiration comes from the early stages of Black Metal i.e. early 90s, but infusing it with some clean vocal ritual-like parts. Guitar wise, the eerie melodies, the arpeggiated open chords and furious tremolo riffing take center stage. There are also plenty of trance-like passages based in different rhythms, ranging from slow parts to full on blast beats and everything in between. Even with 3 songs (out of 8) running past the 10 minute mark, it becomes evident that MORTUUS INFRADAEMONI excels in creating the perfect ambience, with constant variations, dynamics and a detailed composition and song structuring. Production wise, the sound is raw but not totally Lo-Fi. Razor sharp and treble oriented guitars followed by a surprisingly heavy bass guitar that carries a lot of the heaviness of the album. This was also unexpected, since the bass guitar in this genre of music is usually deeply buried in the mix. The drum sound is natural and organic, but not punchy at all. This only reinforced the “cold” quality of “Inmortuos Sum”. The mix is well balanced and even in all departments, although personally I think the drums are a little pushed back in some parts. The vocal department is captivating and multi-dimensional. The constant shift between clean parts, high pitched vocals, mid range screams and low grunting adds yet more layers of intensity to the album. This is a high caliber Black Metal release with lots of influences from the “classic” sound (if there ever was one) permeated with some new and interesting characteristics. Totally recommended. I particularly enjoyed the song titled ‘Ossuarium Of The Black Earth’. It kinda covers all the bases when it comes down to exemplifying both, the band’s style and the essential being of the sub-genre. Contact the band and listen to their previous albums here: https://mortuusinfradaemoni.bandcamp.com. And get “Immortous Sum” from their label here: www.facebook.com/ironboneheadproductions