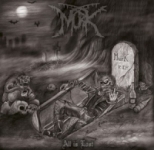 One-man project bands are always lotsa fun to listen to as the history has proved many times before. Well, actually they are only fun to listen to if a) they are seriously well-done and have a drive to sound like a full-fledged band b) you get some strange inner satisfaction to tell people how worthless piece of shits they are. Either way, this one-man Black Metal project act that goes under the name MURK – all the way from Tuscany, Italy, falls into the a-category in my opinion, not so clearly, but it does anyway. Musically we could talk about some crossbreed of bands like HELLHAMMER, DARKTHRONE and JUDAS ISCARIOT probably as the nearest comparisons to MURK, this is naturally left to each listener to decide how they see this 1-man Black Metal band, run by a guy named Lore. “All Is Löst” is MURK’s 2nd album, and the songs are basically mid-paced adrenaline runs, full of primite and raw wickedness and grimness of Black Metal. I must give some credits to Lore for handling all the instruments remarkably well for this project, managing to fool obviously many of us that there’s a whole string of other members behind this band, too. MURK’s songs ooze on “All Is Löst” nothing but a primitive power an energy, having even more clear melody lines in them than one could think of first. Lore’s somewhat familiar sounding vocal patters owe a thing or two for such deadly and filthy throats of extreme Metal genre as Tom G. Warrior (HELLHAMMER / CELTIC FROST), Akhenaten (JUDAS ISCARIOT) and I might even throw Martin van Drunen (ASPHYX / HAIL OF BULLETS) throaty vocals in comparison to him. He’s got a pretty impressive yet postively varied selection to spit his guts out, and when he uses his whole vocal cavalcade for getting his message through the best possible way in the right environment, depending on each song’s nature, it makes the songs to stand out for their own good really. “All Is Löst” is a relatively good Black Metal album, and since there’s only one guy behind this project, it makes things a bit more special and more appreciated in my sincere opinion. Good stuff thoroughly. www.myspace.com/darkmurk