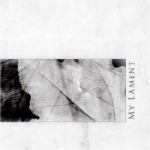 Does anybody still remember the great American Doom kings MINDROT and their fabulous “Dawning” masterpiece (released in 1995 via Relapse Records!)? The band is long gone but the next generation of Doom Metal acts in form of this Belgium combo is easily capable of replacing the big loss. MY LAMENT is presenting after 6 years of existence a very good debut in form of 8 hymns right between Death and Doom Metal. The band was founded in 2003 and the only release so far was their “Beneath the Hidden” Demo released in 2006. MY LAMENT are not trying to impress the audience by the typical blood and suicide topics – very similar to the above mentioned MINDROT – in contrary they are offering a plain and simple artwork for their CD cover & booklet and this plainness is also reflected in their music. The music slowly creates a comforting dark atmosphere without drifting into extremes, melodies are still there and songs like ‘Silent Nights’ – a great songs full of despair and anger – are the best proof for the qualities of this Belgium band. Think that every fan of for example the Norwegian FUNERAL will find his / her dark joy in this release, for sure a band with a lot of potential and maybe a bright future – even if the word bright is more than unsuitable if it comes to Doom Metal. www.mylament.be, www.solitude-prod.com