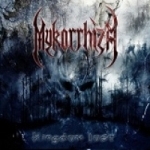 It must be quite a pain to have had an underground band with raving followers and acknowledgment, and then go onto forming a new band that never really has hit it off. The legendary band in question is EXCRUCIATE, a once to be leading band of the brutal Swedish Death Metal scene, but unfortunately it folded after one killer full length release in 1993. Hempa Brynolfsson tried to reanimate EXCRUCIATE in the beginning of 2000, though it turned out as the bastard child MYKORRHIZA, a band that now is ready with their third full length album "Kingdom Lost". One of the reasons that MYKORRHIZA never has made the big impact on the Death Metal scene might be a bit confused stylistic beginning and afterwards dark constructions and a mix of melodic and atmospheric Black / Death Metal and heavier, technical and more still standing parts. The melodic Black / Death Metal parts are the ones that drive the music and make it interesting with the dark and wellmade atmospheres, though they are also the most unoriginal ones. I can’t help thinking of DISSECTION when they are blazing. The heavier technical parts are more original, and they really show the talents the musicians possess, though they are quite boring in the length to be honest, they don’t really kick it. Musician wise we are getting a lot of treats during the 11 tracks, good rhythm patterns, main riffs, melodies and so on… And vocally again an explosion from Anders Strokirk from BLACKSHINE, though in my mind he will always be Atte from HETSHEADS, if I had counted the times I’ve played "We Hail The Possessed…", a pure brilliant growl he has, and the transition from the growl to the possessed raw scream does work so well, he fits all elements of the music. The idea with this band seems more focused nowadays than earlier, and this album also works better than the previous ones. There are some momentum going on here and there. The first track ‘Bloodmoon’ is a nice dark ripper and the second track, the title track, is a nice work with a lot of cold melodies, which makes me think back to the glorious days of DISSECTION, some of the melodic leads and vocal work does go back to the early days of said band and one specific track. If there all the way would be more focus on drive and momentum instead of breaks and melodic leads, which a bit too often drain the music for energy. The loose ends have started to find each other with "Kingdom Lost" so perhaps the revelation will come with the fourth album from MYKORRHIZA. More info at: www.myspace.com/mykorrhizainfo, www.facebook.com/konquerorrecords