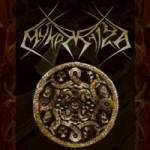 The sticker on the sleeve of this MCD made me curious pretty quickly (so I suppose it did its job, huh?!): “Featuring members of EXCRUCIATE and BLACKSHINE” it says, and indeed – BLACKSHINE’s Anders Strokirk handels the vocals in this new (project?) band, while former EXCRUCIATE guitarist Hendrik “Hempa” Brynolfsson (by the way – anyone out there willing to sell “Passage Of Life” on CD? then get in touch…) is responsible for the bass and guitar parts in the five tracks. The MYKORRHIZA line-up gets completed by Martin Karlsson on drums (can’t think of any band that he may has been in prior to this, sorry…). Musically there’s certainly a couple of promising elements to be discovered in the sound of these guys, but in total it didn’t completely manage to convince me. The raw and heavy side of the songs, mixed with the growled vocal delivery partly brings back memories on the good old Swedish Death Metal period of the late 80s / early 90s (even though this here somehow sounds a bit more Death’n’Roll inspired as well), while the additional (and unfortunately also rather superflous) clean, melodic type vocals very much destroy those promising vibes pretty quickly again. Somehow it’s kinda similar to what SLAYER started on “South Of Heaven”, without ever reaching the class of those Thrash giants of course. Not necessarily bad, if you’re open minded enough to accept some experimentation, but not completely suitable for fans of straight to the point, brutal Death or Thrash… For all further info feel free to contact their label: Konqueror Records, P.O. Box 141, Toa Payoh Central, Singapore 913105, email: konqueror_records@hotmail.com