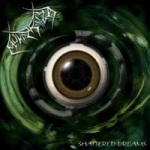 Sweden’s MYKORRHIZA obviously didn’t (either) manage (or care) to become a full band ever since the release of their self titled MCD back in 2002 as the line-up still exclusively consists of Hempa Brynolfsson (guitar & bass) and Martin Karlsson on drums. BLACKSHINE’s Anders Strokirk once again was hired to take care of the (session) vocals, but not only him, there’s also four additional people who contributed voices and / or backing vocals this time (one of them being Lars Levin, Hempa’s old bandmate from his EXCRUCIATE days). Compared to the MCD this album turned out a lot more convincing as they luckily got rid off those annoying Death’n’Roll elements and turned into a far more aggressive and lethal sounding unit. In a way, quite typical Swedish sounding now, but neither in the old school NIHILIST / CARNAGE / DISMEMBER vein, nor in the melodic Gothenburg type direction. The whole record is very raw and partly even delivers the devilish atmosphere of Black Metal, yet maintaining the melodic aspect in the guitar department. Some cleaner vocal parts furthermore got added here and there, but weren’t overused, so that it doesn’t really harm the overall very convincing and quite sinister atmosphere of the album. All in all definitely a big step forward for MYKORRHIZA and without any question far better than their debut release. I still wonder though, who will manage to pronounce their bandname correctly right from the start and what inspired the short intro of the album (which is a German children’s song)… Band contact: henrik.brynolfsson@chello.se, label contact: konqueror_records@hotmail.com