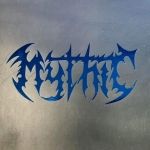 I think the first time I heared about MYTHIC was back in 1994, when a friend of mine introduced me to their EP “Mourning In The Winter Solstice“, which was released back in 1992 on Relapse Records. Back in the days it was not common for women to play extreme Metal or even Death Metal and I was somehow blown away by the all-female trio infernal and their slow Doom-Death. Mary Bielich and Dana Duffey hooked up with Terri Heggen to create a bastard between WINTER and early CATHEDRAL. The material was packed with quite good ideas while the musical skills still were limited but the ideas definitely were good. ‘Winter Solstice’ and ‘Lament Configuartion’ are good and solid Death Metal tracks with a doomy cold edge and rough guttural vocals. While the drumming is not the strongest, the material still has a certain charme and spreads the same cold mood the material of WINTER has spread back in the days. ‘Spawn Of Absu’ starts with bells like in Hellraiser before the heavy guitars spread the cold atmosphere. Even the drumming is better on that one, while the guitars are thick and doomy and packed with some old school Death Metal. Surely not the strongest lesson in the 90s Death Metal history, but I still dig the EP a lot and their material gets re-released on a regular basis nowadays. The six tracks of their “The Immortal Realm” demo from 1991 show a more dirty Death Metal side and only was the beginning of their doomy direction. Definitely rawer and less skilled, the girls already showed their raw approach and will to create evil Death Metal. As a lot of bands from that era they seemed to have practised their asses off as in only two years of existence they managed to create nine tracks in total, spread over one rehearsal tape, one demo and a final EP. The six demo tracks are raw and unpolished, but show good potential even though the musical skills were even more limited, as mentioned, but they definitely tried to create their own sound, which finally lead to their final EP. The three tracks from their rehearsal tape from 1991 could have been skipped but indicate how fast the members have developed their style and worked on their skills. MYTHIC was and still is a band you like or not. Simple as that. Maybe not as important as WINTER or the first CATHEDRAL album in the historical content, but I guess they could have achieved way more if they would have continued. Not a must have, but worth to check and for old school lunatics surely another diverting trip back into the early 90s underground. For more info check one of the following sources: www.facebook.com/mythicband, www.facebook.com/thedevilselixirsrecords