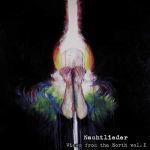 NACHTLIEDER
Views From The North Vol. I
(Nigredo Records)
30:02min

NACHTLIEDER, hailing from Gothenburg, is the brainchild of Swedish musician Dagny Susanne. The new EP “Views From The North Vol. 1”, was recorded during 2018 which represents an earlier stage in Susanne’s musical discourse and consists of old unreleased material produced between 2009 – 2016. With a strong foundation of releases, a self-titled debut in 2013, a second album “The Female Of The Species” in 2015, and the third album “Lynx” in 2018, NACHTLIEDER is a prime example of a band that grew stronger with each successive release. Compared to the savage, raging, and down-tuned soundwall of the latest album “Lynx”, the new EP sounds calm and thoughtful. There is an exotic and perilous feeling to the riffing, which you will notice from the very first song ‘In Solitude’, the same type of atmosphere returns in the other songs too. The tormented quality of the vocals with gravelly growls, adds further raw feel to the whole atmosphere. The drums batter and race, the tension in the sound surges into a feverish frenzy, channeling sounds of madness. But as the torrent abates, the music also conveys a mood of bitter hopelessness and sinking into depths of despair. As for the sound, it is not overtly powerful and aggressive, which may simply be due to the EP’s own specific atmosphere. At any rate, all the material on “Views From The North Vol. 1” is expertly arranged and structured. Also, the cover painting, “Inferno” by Aurvakur perfectly expressed the thoughts and visions encapsulated here. In a nutshell, “Views From The North Vol. 1” is an excellent EP that lives up to NACHTLIEDER’s reputation and also the strength of Dagny Susanne as a sole mastermind behind everything. Now, released through Nigredo Records, this EP is highly recommended for many spins and hopefully, there will also be a Vol. 2, as the title hints. Explore more about the band at: www.facebook.com/nachtlieder and check out their label page at www.nigredorecords.org.