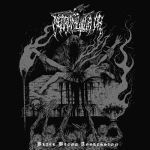 Italy’s NECROMUTILATOR is a band I have been following since I had the chance to review their 2014 debut album "Eucharistic Mutilations". This power trio’s brand of Black / Thrash appealed to me instantly since the music they craft breaks away from the "basics" of this sub-genre, incorporating some late 90s Death Metal sound into it, in my humble opinion. After a very good EP in 2017, their sophomore album, "Black Blood Aggression", expands into their own style. Although their music calls for speed (and yes, there is plenty here), this time, the inclusion of slow and mid paced rhythm patterns keeps things flowing nicely through the album. Both R. (bass) and E. (drums) provide a solid and interesting foundation for P’s riffing and vocals. Actually, the vocals are kinda hard to describe. They have a raspy top end but also a gurgling low register, like a whispered rumbling; awesome all the way. The production is razor sharp and it is tailored perfectly for the band. Even if these guys used all that new technology, it doesn’t show in the final product. Overall, everything sounds natural and organic. Especially the drums, which nowadays seems to be the easiest thing to fake, both in performance and sound. Luckily, this is not the case with "Black Blood Aggression". The guitars have a creepy mid grunt although they live in the higher register, reminiscent of some Black Metal classic albums from the mid 90s. The bass has a naughty tone, almost distorted but present all the way, which helps the guitar a lot. And last, but definitely not least, the drum work here is amazing. Everything stands out: the fills, the cymbal accents, the constant tempo shifting and the feel. Absolutely relentless! Clocking at 40 minutes, you won’t notice when the album is done, but one thing is for sure: you’ll be hitting that repeat button right away. This is one of those releases that were meant to be played more than once at a time. And although NECROMUTILATOR are not inventing this sub-genre, their style, their vision and their conviction make this album a must have for fans of Black, Death and Thrash Metal alike. Because it deserves it, as simple as that. More info on the band here: www.facebook.com/necromutilator666. And get their stuff from the label here: www.tfhrecords.com