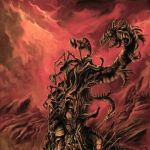 Finnish old school Death Metallers NERLICH called it quits in 2008, after releasing their not-so-well received last EP, titled "Innards". That particular release can be considered as the band’s low point during NERLICH’s whole otherwise so strong career. Sadly, NERLICH’s debut album "Defabricated Process", that was released on OSM Records back in 2007, really didn’t get enough support or promotion that this release would have deserved in order to keep NERLICH’s name better on people’s lips. Well, life – or music life or industry in particular, indeed is a pretty tough teacher sometimes… Now 5 years later since the split-up of NERLICH, they decided to reform their troops in 2013 again, with a handful of new tricks and treats burning down in the bottom of their pockets. With a complete new line-up, having only NERLICH’s true spirit and soul Miikka Merikallio left on vocals and guitar, Miikka and his 2 other helping recording mates (whose names will be kept as secret, for time being at least) visited one studio to record 4 new songs + a cover version of legendary Finnish Deathsters CARTILAGE’s song, ‘The Altar’. Having pealed off the band’s old skin somewhat totally, NERLICH 2014 Anno Bastardi sounds quite different; more melodic, more refined, a tad heavier and in many ways more professionally prepared for churning out the kind of old school Death Metal that is meant to turn some ears toward their side. Indeed, NERLICH’s silent period of 5 years has done some miracles for the band. On this new EP, titled "Eternity’s Gate", NERLICH have clearly put more emphasis on sticking hooks, catchy melodies and wonderfully striking and eerie atmospheres than ever before, which is a very good thing. Then again, they have somehow understood just a slightly better the importance of keeping things varied within their song structures, really neither counting fully on the power of fast – tinged parts nor slower elements in their new songs but sort of balancing out both worlds by incorporating both a bit faster and slower sections into these new songs. Straight from the opening, pretty much DEATH – tinged song ‘Projections…’ – up to the last prelude type of song ‘Mercury And Acetates Pt.2’, which by the way reminds me of another Finnish old school Death Metallers KRYPTS due to its slow and creepy, dark horizons painting guitar melodies – it all sounds like NERLICH only haven’t returned to shake tenderly some already known foundations just a little bit but are also determined enough to make them rumbling down piece by piece by all that weaponry they’ve got in their hands since the comeback of the band. Also, Miikka’s death growls are some of the most convincing ones out there these days I have heard for a long while, reminding me quite a bit of John Tardy of OBITUARY and David Vincent of MORBID ANGEL during the days of "Altars Of Madness". Also, the ex – members of CARTILAGE should be proud of how the NERLICH camp has treated their original song in a very respectable way, staying amazingly truthful to the original structure of the song, just with a twist of NERLICH’s own sound added. So, do you think "Eternity’s Gate" is worth checking out? You bet it definitely is… NERLICH’s new EP is absolutely one of the most pleasant surprises of the year so far. NERLICH can be found at: www.facebook.com/nerlichband