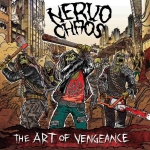 Sixth album of this Brazilian Deathrash squad. I think I have an album or two somewhere around, and by what I can remember, this is definitely their best work. Maybe the closes comparison will be one with the more Death Metal SEPULTURA with a few touches of OBITUARY. Do not be fooled by the comic yet diabolic art, which suits more a retro Thrash band; this is some of the best Deathrash coming from those lands as can be heard in the killer mid-tempo crusher ‘The Devil’s Work’. The band is good enough to sound brutal while going fast and also has that edge to sound very heavy in the slower songs. The very good production values also add that touch of nostalgia as if this was released alongside similar acts like MALEVOLENT CREATION or SOLSTICE. For what it is, it is an enjoyable piece of Metal, you will not find anything new or groundbreaking, but the overall quality of composing and executing is above the average (the album also includes the track ‘Lightless’, the band’s contribution to the HEADHUNTER D.C. tribute album, and the limited first edition also comes with a free bonus DVD, that features an in-depth, pro-shot NERVOCHAOS documentary entitled "Warriors On The Road – Part 2" with interviews, backstage footage, live shows and more – Frank). More info at: www.facebook.com/nervochaos, www.greyhazerecords.com

Julian “Ghost Of The Past“ Nunez

Julian “Ghost Of The Past“ Nunez