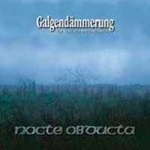 The band from Mainz / Germany had been different from the start and their musical legacy is still outstanding if it comes to the German Black Metal underground. NOCTE OBDUCTA split up in early 2006 despite the fact that their final output "Sequenzen Einer Wanderung" saw the light of the day in 2008 (the two tracks of this release had been already recorded within 2005 / 2006). It took several years until our dear friends and re-release specialist of Metal Mind Productions finally arrived at the letter N of the back-catalogue of German’s finest Metal label! With "Galgendämmerung" – the fourth NOCTE OBDUCTA release – a modern German classic is becoming available again without the need to invest a small fortune via your local Ebay network. Originally released in 2002 via Nuclear Blast’s sublabel Grind Syndicate the album represents the typical ugly face of NOCTE OBDUCTA drawn between the freezing cold aura of northern Black Metal and their still outstanding lyrical approach and avantgardistic standards. But the band is not fully incorporating these influences into their music, so we are not facing two equal sides of a coin. The slightly avantgarde touch is shattered over the whole album and comes in small but effective portions. The heart of "Galgendämmerung" is undoubtedly the final track ‘Wenn Nur Im Tod Noch Frieden Liegt Teil 1+2’ which lays in some way a dark shroud over the whole album. The release is limited to 2000 copies and comes with full background history – but lacking of any kind of bonus material which normally makes such a release essential for all die hard fans of the band – but as stated above this version is a fair alternative to get your greedy fingers on this rare release. For further info please check following sites: www.metalmind.com.pl, www.nocte-obducta.de