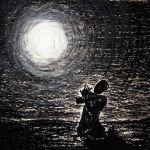 I guess, NOCTE OBDUCTA from Germany don’t need too much introduction here. Active since 1995, the band is one of the veterans in the Black Metal scene from Germany and return with album number twelve in form of “Irrlicht” again on Supreme Chaos Records. The opener ‘Zurück Im Bizarren Theater’ offers a raw and punky approach with grim German vocals before turning into a raw but still melodic direction. The second half of the track is psychedelic Rock influenced and gives the material a really unique touch. ‘Von Stürzen In Mondmeere’ surprises with a style change and has a Doom / Death touch which reminds me of very early ANATHEMA or PARADISE LOST but with the typical grim caws of Marcel. Honestly I could imagine a full album in that direction as a side-project as this sounds honestly good. ‘Rot Und Grau’ starts with a heartbeat and synthesizer sounds before a keyboard driven Black Metal track shows its ugly face and especially the screams spread a disturbing atmosphere before the bizarre sounds return and the track somehow sounds like a Black Metal version of Joachim Witt in his late era where he also offered some interesting tunes. ‘Der Greis Und die Reiterin’ goes into the Post Black Metal direction and is a solid track before ‘Der Alte Traum’ again comes up with these warm Death / Doom influences and that’s a direction I would really love to hear from them more often as this one is really outstanding and combined with their melodic Black Metal this is maybe the best track of this album, especially because they take the time to slow down the pace and show their prog-interested side. ‘Bei Den Ruinen’ follows the same path and goes even further with the melodic but experimental side. ‘Noch’ closes the album with really warm melancholic guitars and a fine sense for melodies and sounds. “Irrlicht” definitely is a good and interesting album with some really good tracks, a fine production and even better instrumentation. But it also sounds like a change and I am interested to hear what will follow next. Fans of the band should defintely get this fine piece of art. For more info check one of the following sources: www.facebook.com/nocte-obducta-189142951148369, www.facebook.com/supremechaos.de