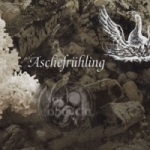 I don’t know why stuff like this is called “avantgarde”! The term is far too easily used these days. I have never heard anything from NOCTE OBDUCTA before but with this release I don’t have the impression of listening to something completly innovative or new. On the other hand I have to be fair for this release only contains two tracks. The titletrack was released before on vinyl (says the veeeeery short info), the other one is a remix of ‘Vorbei’. Maybe this is the avantgarde thing in Black Metal: releasing a known and a half-known track as a single! This is beyond me, ergo the avantgarde – principle! But maybe it is just a farewell release for I have read that NOCTE OBDUCTA disbanded this year and formed a new band called DINNER AUF URANOS. The title track is not bad, catchy melodic mid-tempo Black Metal with German lyrics, a dark (more HIM dark than SUNN O))) dark) atmosphere and a good sound. I can imagine that they have put out one or two releases that could have been innovative for their time but with only two tracks it is hard to give you a informative review on the band.. I will wait for that DINNER band. More infos on www.nocte-obducta.de