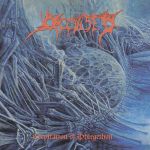 After two demos and two EPs, this is the debut album of OCCULSED, a Death Metal band from Atlanta, USA, that seems to be very intent on creating some old school brutal music. The excellent cover artwork and album title hint as much, and indeed as the album starts playing we are given a rough treatment of extremely downtuned guitars and very low growled, guttural vocals, with a killer drumwork that, in spite of much variation, including some Death Doom parts, very often goes into dizzying hyperspeed. The songs are heavily reminiscent of bands like INCANTATION, with more than a touch of BLASPHEMY, and the lyrics deal with somewhat abstract depictions of cataclysmic visions of abyssal horror. The three band members seem to be very much active in the underground, playing in a large number of Death Metal or Death Doom bands and the likes. Mainly the vocalist, Jared Moran, who – and I took the trouble to count them – seems to be part of 47 other bands! Not counting the ones he is no longer part of. So this might be a record of some kind I guess. The overall sound of the album is not for the faint-hearted, with the buzzsaw / blender-type guitars, sometimes sickly disjointed, and the vocals resembling grating granite slabs, and during the first listen or so the songs tend to blend into each other, but soon you come to appreciate the strength of titles like ‘Concupiscence Of Frenzied Humors’ or the chaotic massacre of ‘The Soul’s Admonishment’. And the drummer is always busy doing his truly remarkable work. So if you want to have your ears violated by this vicious assault, proceed to www.facebook.com/occulsed or visit their label at www.facebook.com/everlastingspew