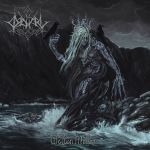 ODAL, with their more than twenty years of existence in the German Black Metal scene, certainly stands the taste of time. After forming in the heydays of 1999, in each of the previous four full lengths, as well as the output released on splits and EPs, mastermind Taaken and his forces manages to carve a distinctive style and vision of their own. And their ways of combining the harshness of Black Metal with melodic and atmospheric elements can captivate and produce countless absorbing moments. It also can take you on a trip to dark and hidden places and tell ancient tales of folkloristic horrors and mournful souls. Creating that kind of special atmosphere by combining traditional elements with unconventional instruments is Taaken’s biggest strength as a songwriter. Also the seemingly effortless combination of heaviness and ambience, which is evident in nearly each of ODAL’s releases, tells the secrets of their perseverance in the over-saturated realm of Black Metal. In two decades of existence, the Germans were never remaining silent for long and “Welten Mutter” now released as their fifth full-length overall. Like all the previous albums, “Welten Mutter” was once again created as a concept piece. The main theme deals again with nature, life and death, striving and transience, with reference to the old, pagan world of gods. Opening with the melodically intense ‘…Um Ewiges Zu Schaffen’, the band sets a very lively and intense mood with piercing guitars and catchy tempo changes. ‘Hellwach Schwelgend’ and ‘Schattental’ come with an enticing melodic core and wave after wave of riffs colliding with additional string instruments gives that Pagan and Folk edge to the music. Such build up, reminds of early SATYRICON and WINDIR, that never breeds monotony and always remains interesting. The album title track and ‘Welten Geflecht’, delivered in mid-paced to moderately fast tempos, mark a delicate balance of somber tones and intensity. The production is pleasantly raw, without any graininess. That makes the drums fit neatly into the music. Nothing fancy here, and nothing excessive, only moderate blasts and slower rhythmic beats. The vocals are penetrating, fanatical and intense. Like harsh drawn out yells, that not really scream nor growl. In terms of text, music and artwork, the whole album forms a unit that is intended to have a spirited effect on the listener. “Welten Mutter”, released in co-operation with revered Eisenwald, is recommended for fans of Black Metal. Explore more about the band and label here at: www.facebook.com/odaloffical-615696808599097, www.facebook.com/eisenwaldofficial