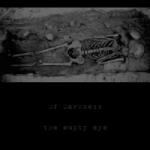 Seeing that GRAVEYARD who share two members from OF DARKNESS recently got featured here made it clear that I finally had to finish my review of “The Empty Eye” after long delays. This delay was not the result of an uninteresting or dull recording, quite the opposite actually… it is rather safe to say that OF DARKNESS gave birth to a mindblowingly perverse doomridden death-trip that clocks in around about one hour – absolutely no easy listening and hence hard to grasp. Originally brought forth in the fall of 2005 by Bastard and Julkarn this heavy slab of oppressive “Funeral” Death / Doom is subdivided into seven parts, “a one hour long passage through the void of existence and the emptiness of all that is of human nature”, as the info tells us and it can be concluded that this is a sound description actually! “The Empty Eye” is easily one of the most fucked up extreme Doom releases I have had the horrible pleasure to listen to in recent times. Sparingly enriched with some atmospheric effects and different vocals styles, ultra deep grunts as well as twisted spoken and whispered passages, and backed up by buzzing guitars oozing hypnotic riffs the seven songs plod forward with a tempo comparable to the heart beats of a cyclopean animal in hibernation. This corrosive continuum gets ruptured by sudden gong or bell chimes, manic rants and twisted hissing of indecipherable declamations, then falling back into a slow comatose pace again. Their well-dosed use of ambient textures and effects must be mentioned here, considering how painfully pathetic and inadept many Metal bands try to use those and end up with preset sound gimmicks. Here, everything is amalgamated into a thick pitch black aural offering as it should be. Musical comparisons? Good question and part of the reason why it took me so long. Actually, I am not sure if the description Funeral Doom may not be slightly misleading as there is no trace of solemnity to be found here (think of EVOKEN for example), just pure fucking suffocating darkness. CATACOMBS come to mind due to their similarly monstrous approach to heaviness but OF DARKNESS are less static and more ritualistic. One comparison which might surprise our readers may be… ABRUPTUM! Not the full lengths but the early demo and EP stuff, though. I always thought that ABRUPTUM were rather ultra extreme Death / Doom due to the downtuned guitars playing reduced bizarre riffs and the slow twisted drumming and lets not forget about the deathly guttural vocals either. Julkarn and Bastard have come up with what I would describe as a bastard (ha!) heir to that sound and they open the portals to darkness in a convincing way. Listeners of SKEPTICISM and NORTT as well as ESOTERIC, UNTIL DEATH OVERTAKES ME, MOSS or UNHOLY should should add OF DARKNESS and their brand of twisted ritualistic Death / Doom to their list. Originally “The Empty Eye” was scheduled to be released by Xtreem Records. I have no idea if that idea fell through yet I strongly hope that this is not the case as this material here is just too good! Let us conclude this with the band’s motto: “What can be dead, should be dead.” Well spoken.To grasp the darkness, go there: www.ofdarkness.com, www.myspace.com/theemptyeye