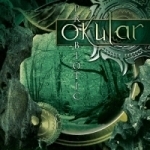 Traditional Death Metal hasn’t evolved that much since its conception, there have been bands straying from the paths, making the music more technical, faster, brutal, though that’s more of a natural progression than a step of evolution. The most extreme causes have been so extreme that it crosses boundaries from Death Metal into other territories, and is it then Death Metal or something else? The Norwegian band OKULAR is trying to take Death Metal a step further, with a solid offspring in what DEATH created, adding more progression and depth. Øystein G. Brun of BORKNAGAR has said that OKULAR is Death Metal’s BORKNAGAR, I’d rather say that OKULAR is Death Metal’s NEVERMORE mixed with MERCENARY, which also are very influenced by the already mentioned Seattle band. OKULAR might hit off some of the epic atmospheres that their fellow Norwegians are known for, though BORKNAGAR has always made more grandiose music than what OKULAR presents on "Probiotic". The arrangements remind me a lot more of the progressive songwriting that NEVERMORE has perfected. A good mix between heavyness, good catchy melodies and progression, together with the mix of aggressive and dark vocals, and almost clean vocals stuffed with frustration. OKULAR delivers a strong and quite catchy debut album with a lot of strong moments and good songs with flow and progression. Strong musiciansship, often a real pleasure to listen to, there are especially some good guitar, drum and vocals parts. The production is also nice and organic, still being clear and leaving room for all the instruments, even though the bass could have a more prominent figure, instead of being hid behind the crushing wall of guitars. OKULAR is an interesting encounter and I am looking forward to hear where they’ll take their music with the upcoming album, which is being recorded as we speak. This might not be the definitive future of Death Metal, as it strays a bit from the traditional path, though it might be the future of heavy and relentless Progressive Metal. Take a listen and be more enlightened at: www.myspace.com/okularmetal and www.regenerativeproductions.no