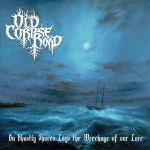 The name of the band is quite intriguing (and damn, I really like the name, it is just so inspiring). Mystic in a way, so to speak. And so is the music performed by this band from the United Kingdom. The base of the music is old school type of Black Meal, that reminds of early CRADLE OF FILTH especially in the vocal section (which some might find to be an acquired taste as Dani-esque screams all the time might be too much for some), and also many atmospheric passages and with a heavy use of keyboards, while the guitars are guiding the music. They are not up-front, creating the aura the artist wants to create. Maybe for my taste more up-front guitars would not be that bad, but I must add it works quite well, for this band that was formed back in 2007 and this is actually their third full length. Also the band is a bit on the epic side of things. The shortest song is over 5 minutes, so they have a lot of creativity going on most of the times. And do I hear a bit of SABBAT (UK)? I am pretty sure… but there is also a lot of Heavy Metal influences, some Doom Metal touches in the fine English tradition too, and of course more than one reference to the master Quorthon and his beastly creations. There is also some reference to EMPEROR as well, so Black Metal fans with a touch of symphonic essence take notice. The lyrical aspect of the band is far away from your everyday we hail the goat thing. It is more about old tales and mysteries of their lands, and that is also quite interesting. Some bits of their music have a NOCTURNUS style delivery, and that only could be a good thing. This is the kind of music that deserves more than one listening as I came up every time with something new. More than once this was something that got me in a deja-vu of the 90s but in a very good way. Nowadays, with some bands that us old Metalheads used to follow, like DIMMU BORGIR or CRADLE OF FILTH, we feel that they have way too much adrifted from their great early masterpieces, this is for sure something that can fill that emptiness into this age. www.facebook.com/oldcorpseroad, www.trollzorn.de