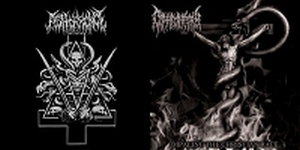 Five years after the very cool Relapse Records four-way split album "Brazilian Assault" two of the bands share a disc for the second time: OPHIOLATRY and ABHORRENCE! I don’t really think there’s still need to introduce any of them to lovers of brutal Death Metal the Brazilian way as both have built up a very loyal following within the underground for several years now. While OPHIOLATRY have been very active, putting out several releases over the years, it remained very quiet in the ABHORRENCE camp ever since their excellent Listenable / Evil Vengeance Records debut "Evoking The Abomination". So, what do we get here? Both bands contribute four songs. OPHIOLATRY deliver a new version of the track ‘Havoc’ (originally to be found on their Evil Vengeance Records full length "Anti-Evangelistic Process"), a NAPALM DEATH cover of their classic ‘Scum’, a previously unreleased track from the recording sessions of their debut album (‘Impalling The Christian Race’) as well as a live version of the old demo classic ‘Opposite Monarchy’. It seems that ‘Havoc’ and ‘Scum’ have both been recorded with the help of a drum machine, which unfortunately takes away a little bit of the natural feel of the band’s blasting brutality… The songs are both very cool, but if they would have been performed with a human skin basher, the result most certainly would have been even more convincing. The ABHORRENCE part on this split CD consists of the title track of their "Evoking The Abomination" album, two exclusive brand new tracks (‘Shatterer Merciless’ and ‘Blackest Execration’) and a live version of ‘Sacrificial Offerings’. The two new tracks easily live up to the high standards set on their previous demo- and album-releases, which means that also ABHORRENCE are still going strong and haven’t changed a bit, despite the long period of silence! The quality of both bands’ live recordings is surprisingly good and the used cover art simply fantastic (OPHIOLATRY’s part was done by Rafael Tavares, while ABHORRENCE come up with a Joe Petagno piece). So, all in all this is a nice additional item to the regular releases of both bands and a really cool start for the newly founded Malignant Art label. Websites of interest: www.ophiolatry.com.br, www.siage.com.br/abhorrence.htm, www.malignant-art.com.br