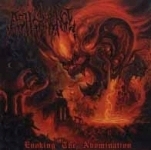 KRISIUN beware!!! A new deadly force named ABHORRENCE just unleashed a helluva blasphemous debut full length by the name of "Evoking The Abomination"! These guys are young, they are hungry and they easily take brutality to the next level. Straight after having released their two demos ("Ascension" in 1997 and "Triumph In Blasphemy" in 1999), the Arroyo brothers Rangel (guitar / vocals) and Fernando (drums) as well as bassplayer Kleber Varnier already got label interest from Wild Rags Records, who offered them to re-issue "Ascension" on CD in 1998. One year later Relapse Records stepped into the picture and added the band’s second demo to the "Brazilian Assault" compilation CD, which certainly helped even more to get the name ABHORRENCE out to the world. In January 2000 they finally signed a deal with the American label Evil Vengeance Records (Listenable Records licensed the disk for the European market) and the result is a blasting, approx. half an hour long thunderstorm named "Evoking The Abomination". Every little detail on this album just seems to fit together perfectly, starting with the really old-fashioned, yet extremely cool looking logo design, the demonic Joe Petagno artwork, which delivers the overall evil approach of the band’s lyrics in a perfect way and of course: the music! Eight furious tracks of the most brutal and devastating Death Metal, somewhat inspired by the blasting intensity of early MORBID ANGEL and probably even more by fellow countrymen KRISIUN, which ABHORRENCE are pretty close to. Even though the album was recorded in Brazil under circumstances that are mostly below the standards of American or European studios, the overall sound still turned out very massive (HATE ETERNAL / MORBID ANGEL six stringer Erik Rutan did the mastering in Florida). ABHORRENCE is another proof of how healthy the current brutal Death Metal underground is and "Evoking The Damnation" without a doubt one of the finest debuts in quite a long time!! Brilliant!