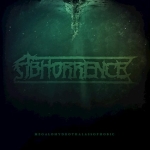 If you’re a regular reader of VFTD you should know that Finland’s ABHORRENCE was a short-lived cult Death Metal act that was active in the late ‘80s / early ‘90s, so there’s no introduction needed. Well, they are active once again since 2012 and have just released an EP entitled "Megalohydrothalassophobic" on Svart Records, their first studio recording in more than 25 years! This new stuff is not really different from what they have released in the past in terms of composition (something you cannot say about another cult act as RIPPIKOULU, although I enjoyed listening to their last offering). For obvious reasons the sound differs from their early raw material, but I guess they tried to keep some elements present on this new release. After a short intro, this kicks off with ‘Anthem For The Anthropocene’, a convincing mid-paced Death Metal track where the distinctive vocals of Jukka Kolehmainen take you at once to the past. The next track, ‘The Four Billion Year Dream’, is a varied Death Metal song. I really love the way this composition is built: awesome riffing, great tempo changes here and there, nice transitions from slow to fast passages, blast beat and double kicks. They don’t need to be fast as hell to be brutal (the way too many contemporary acts ‘understand’ Death Metal nowadays). ‘Hyperobject Beneath The Waves’, the fourth track and ‘The End Has Already Happened’ (which offers some weird intro) close this good EP. As nothing is perfect I must say that this release is a bit overproduced for my taste. I really miss some raw, filthy sound. Anyway, this EP is just 23 minutes long but it’s worth every minute. If you’re are deep into Finland’s awesome scene from the early ‘90s (just think about DEMILICH, ADRAMELECH, AGONIZED, RIPPIKOULU, DEMIGOD and many more), this stuff will satisfy your thirst for Death Metal in the old classic way. You can order a copy at www.svartrecords.com. Stay tuned about next shows and activities of this legendary act at www.facebook.com/abhorrencefin