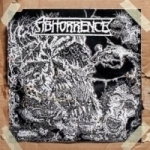 “Completely Vulgar” is the first official, proper compilation of Finnish Death Metal act ABHORRENCE’ sadly few recordings, consisting of their 1990 7” EP, the “Vulgar Necrolatry” demo, seven live tracks and the “Macabre Masquerade” rehearsal. Due to the poor sound quality tracks 9 to 17 (live and rehearsal) are hardly enjoyable but nice bonuses for total lunatics who love to hear every single goddamn note a band has ever put on tape. I have to admit, I could have kept living on without hearing that. BUT, the raw and rabid material of the short-lived band’s 1990 demo / EP is absolutely essential for every Finnish Death Metal enthusiast out there as ABHORRENCE created dark and violent tunes that have not lost any of their primal force. These guitars tear through your speakers like a chainsaw through trees destined to become wooden coffins! One adjective to describe this, well f**k adjectives, let’s go the onomatopoetic way with “aaaaarrrrggghh!” Too bad these guys never released a full album since I would have loved to hear studio versions of ‘Adoration Of Abscessed Cadavers’ or ‘The Macabre Masquerade’ as well. Being the starting point of AMORPHIS adds a certain additional relevance to this release which was created in co-operation with original singer Jukka Kolehmainen and comes along with a 16 page booklet in a mini-gatefold style. So don’t end up as one of these morons paying tons of bucks for a crappy bootleg or rotten original tape that’s been lying in some garage for ages and sounds like a moaning pig. Just go to www.svartrecords.com and order it at a reasonable price and may I cast my humble vote for a reunion gig at Party San Open Air and proper album one day! Some things are just too good to be lost. More info at www.facebook.com/abhorrencefin