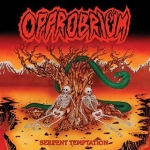 It’s time for a real classic! Yet some of you might have never heard the name OPPROBRIUM before. But I’m sure the name INCUBUS rings a bell, because that’s the moniker this band used to have before and under which the band became known. The band was founded in 1986 in New Orleans, Louisiana by the brothers Francis (vocals and guitar) and Moyses Howard (drums) with Scot Latour on bass. Their first demo “Supernatural Death” a year later already gained some attention, yet their extremely furious Thrash Metal only led to a record deal with the a tiny label called Brutal Records. Thanks to some license deals, the album got spread anyway and really came as a bombshell in the extreme Metal underground. “Serpent Temptation” stood in line with early SLAYER, SEPULTURA and DARK ANGEL back then and was not weaker than these acts. With a more professional label backing them up, INCUBUS would have become a big thing. All the songs on the A-side, like the opener ‘The Battle Of Armageddon’, the ultra brutal and rabidly fast ‘Voices From The Grave’, ‘Sadistic Sinner’ or the frenzy band anthem ‘Incubus’ still make heads rotate in ultra speed. And the four tracks on the B-side were not B-stock, especially the title track ‘Serpent Temptation’ and the closing Thrash attack ‘Underground Killers’ still kick serious asses. With such a smasher at the back, it is a real wonder that INCUBUS haven’t become something big. Yet, life was not that good to the Howard brothers, now without Mr. Latour. Their second album “Beyond The Unknown” was released by Nuclear Blast in 1990, and it was not only more in the Death / Thrash direction than “Serpent Temptation”, but it was even a little better in my ears. But despite this again strong album, INCUBUS were swept away by the running Death Metal wave. Line-up problems did one last thing and the unlucky fellows INCUBUS nearly got forgotten. It took the brothers a whole decade to record new stuff and due to legal concerns, they changed their name to OPPROBRIUM to release “Discerning Forces” in 2000 and “Mandatory Evac” eight years later. But the underground fame of especially “Serpent Temptation” was unabated. This album already experienced a very doubtful re-release in 1996. A new cover often ain’t a problem, but for this release, the song titles were changed, the lyrics re-written and in addition, the vocals and bass was re-recorded as well, changing the original album pretty much. The recent reissue is of a different quality, since the original recordings were carefully re-mastered and the album is even decorated with the original artwork. In addition, the four songs of the “Supernatural Death” demo recordings were used as a bonus, which means we have the original and even more unpolished versions of four album tracks on the disc as well. There’s just one thing that I need to criticise here: the re-release will be available under the moniker OPPROBRIUM, despite the fact that the band was named INCUBUS back then. In my eyes, that is very distracting and it even kills the magic of the original a little bit (I totally agree! A sticker mentioning the "new" name OPPROBRIUM would’ve been the better solution here for sure – Frank). But maybe this is counting beans. Nevertheless “Serpent Temptation” should be a must for all those who dig 1980s Thrash Metal and like their Thrash like me: the rawer, the better. So go ahead and check this reissue: www.relapse.com, or visit the band at: www.facebook.com/opprobriumofficial