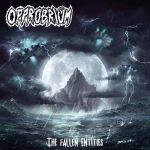 I have been following this band since their INCUBUS days… a name they never should have given away to the other crap band. Anyway, they changed the band name with a really awful logo, but retained the most important thing: the killer music. This band, although residing in Lousina USA, is originally from Brazil, and this is actually their 5th album (I do not take in count that "Serpent Temptation" re-recording, not bad but the original is always the best). The band is just the Moses brothers and no matter if they have been doing this since 1986, this new album is just as extreme as the band has always been. As a matter of fact this is closer to their second album "Beyond The Unknown", which had a thrashier edge than the more Death / Grind approach of their debut. And everything works just fine here. Maybe I can sense some brutal Death Metal in their music, but the Thrash part is always there. SLAYER and KREATOR in their best days still remain as references, and the overall production and musical execution is as top notch as only time gives that expertise. Also, many will remember that the lyrical aspect of the band was quite a religious one (something the band was never speaking out that much, but it is there) and now the lyrics tend to be more about apocalyptic reflections, just to give you an idea. But, let’s not get away from the music as that is what matters the most. Every song on here is about intensity, although they do have some mid-tempo parts, it is while playing fast that the band sounds better. The guitar playing is just killer, do not expect something too technical, just few doses of that, and mainly straight ahead thunders. The drumming is also very good, intense and up to the point and the vocals are also up there with the required venom needed to spread the words of these angry men (is it just my personal wrong impression or does Francis sound a bit like Chuck Schuldiner here and there? – Frank). While this might not be their best work, I can tell you OPPROBRIUM never ever dissapoints. They still use that ugly logo, yet the cover art is killer. And to see a label like High Roller Records doing new editions now, rather than their excellent re-editions they were known for, is a great thing. A no brainer to get if you are into in-your-face quality old school violent Death / Thrash! www.facebook.com/opprobriumofficial, www.hrrecords.de