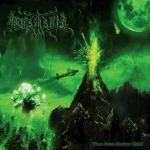 Germany’s number one in playing the Gothenburg styled melodic Death Metal, ORDER TO RUIN have just self-released their album number five. As mentioned in my previous reviews, their fast speed in releasing new albums bears always the risk to release unproper material but the two guys Denis and Mike really are so straight and focused on what they do that again they have released another album above average. Fans of IN FLAMES during their “Subterranean” or “The Jester Race” period will not be disappointed at all, as ORDER TO RUIN continues, what IN FLAMES started and stopped to do after the release of “Whoracle”. The opening track ‘The Locust And The Lancer’ is totally IN FLAMES worshipping but very enjoyable if you like this old style. ‘So, Black, So Pure’, ‘Crossworld’ and ‘Nightwing’ easily would have brought them a lot of attention and some record deal offers, if they would have been written twenty years ago. Sure, there is no development of their style into another direction, but this is the decision they have made and they stick to what they do. Their style on “Where Future Shadows Unfold” remains mostly unchanged compared to their previous release “The Book Of Nemesis” but the amount of solos and killer guitar leads have increased once again and it seems, they want to become the real IRON MAIDEN of melodic Death Metal. Also the programming of the drum computer has been perfected and sounds very dynamic and varying but also with enough power and fast double-bass fundaments. Worth to mention are also Mike’s vocals somewhere between grunts and screams which really are varying and well-fitting. Everything else worth to say I have mentioned in my previous reviews but fans of this kind of style can purchase this album blindly and the guys are really worth to be supported, as they already have started the preparations for their next album and pay all on their own. The album with another really nice cover artwork can be purchased again in digipak format directly from the band for 7 Euros plus postage and later on via reverbnation. Check them out at the following locations: www.facebook.com/ordertoruin, www.reverbnation.com/ordertoruin, or for CD orders mail to: hellworks@web.de.