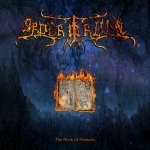 ORDER TO RUIN
The Book Of Nemesis
(self-financed)
40:06min

ORDER TO RUIN from Munster in Germany and their mastermind Denis Pfeffer are restless in following their musical preference, which is called 90s melodic Death Metal from Gothenburg. "The Book Of Nemesis" is already their album number four within three years. Of course, releasing so much material in such a short period of time bears the risk, that the quality of the material decreases. ORDER TO RUIN managed to grow from album to album in small steps anyway. At first sight, their style remained unchanged, but listening to the material more detailed, you can find some small but relevant changes. The main topic is clear and the listener can hear their love for this old style, only a few bands still play convincingly. When they released the first taster of the new album via their facebook page, the title track made me hungry for some more stuff, as I still like this genre, which caught me back in 1994, when an album called "Skydancer" enchanted my ears. The changes in their sound are fractional at first view, but more influences of classic Heavy Metal in form of more classic guitar solos, partly contributed by guest musicians, found their way into their sound. Also some carefully used Power Metal tunes can be heared as well and complement their sound and fit very well into the overall musical direction. Also the use of keyboard sounds has increased and their melodic direction has nearly been perfected on the new album. Their new vocalist Mike Seidel from the band FEAR SHALL TORTURE, who also is in charge of the bass, has been integrated well and his vocals fit perfect to the band’s sound and I hope that he will also perform on the next album. All in all, the band has really perfected their musical vision on "The Book Of Nemesis", as their songwriting is on its peak and with ‘Age Of Kings’ and ‘My Fiction God’, they released their best songs so far. The production and mixing is also really professional this time and the sound turned out really great considering the fact, that this is again a self-released album without any label support, as the band wants to continue as a fun-project without any pressure or compromises. You can purchase the album, with a really nice cover artwork close to GATES OF ISHTAR’s last album, in digipak format directly from the band for 6 Euros plus postage and later on via reverbnation. Check them out at the following locations: www.facebook.com/ordertoruin, www.reverbnation.com/ordertoruin, or for CD orders mail to: hellworks@web.de.