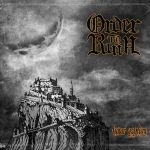 Time goes by and Germany’s underground warriors ORDER TO RUIN once again have locked themselves in the cellar of mastermind Denis to create a new album only some months after “Where Future Shadows Unfold”. The outcome is called “Lunar Asylum” and is album number six in their short band history (plus 2 EPs). What I really like a lot is the fact, that they slightly change their style on every album but mostly in unexpected areas. This time the band changed their guitar sound a bit and the rhythm guitar has a slight HM2 painting now which brings more heaviness into the band’s sound. Together with Mike’s rough vocals, more grunted than screamed, the band has a new rough fundament which sounds very well und fits good to the band’s main sound which still is the Gothenburg styled melodic Death Metal. The best comparison which comes to my mind is the one and only full-length of THE EVERDAWN called "Poems – Burn The Past". Tracks like ‘Planet Zero’ or ‘Dreamdemon’ really blow the mind of the listener still longing for this style. ‘Predators From Gaia’ or ‘Arcane Walker’ still show that ORDER TO RUIN is still full of ideas and creativity and that their history still has not come to an end. Production and mixing again is very well-done for a self-released and self-financed release. The CD version, which is limited to 65 copies only in digipak format, comes up with a cool and well-fitting cover artwork and is already sold-out, but the tracks still can be downloaded from their bandcamp site. Fans of the mentioned style can purchase this release blind and should support the guys. More info at: www.facebook.com/ordertoruin, https://order-to-ruin.bandcamp.com