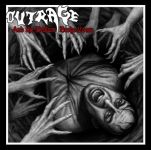 If you check the Metal Archives pages for a band called OUTRAGE, you’ll get about a dozen results. A Japanese band of that name probably is the best known of them. But I did not expect that there’s a German band called OUTRAGE that is around for ages and released seven albums through the many years of their existence. How could that only happen? I wasn’t quite sure in the beginng. OUTRAGE already started in the 1980s and released four demos before splitting up for quite a while. In 2004, singer Frank and guitar player Udo reformed the band with a new (and since then quite often improved) rhythm section. Since then, seven albums and a demo collection saw the light of day, but passed me by. Now album number eight, entitled “And The Bedlam Broke Loose”, is out on Italian Metal On Metal Records. Maybe the tiny label is an explanation for the fact that “And The Bedlam Broke Loose” is the first OUTRAGE album I listen to, since that label is responsible for now three albums of the band after five albums they put out on their own. Then again, the tame sound of OUTRAGE might be the best explanation why they didn’t blow up a lot of dust yet. Blackened Thrash Metal with not just a hint of the old school surely is a style that is exciting and hits my nerves as long as it is raw, unpolished and enthusiastic. All of these qualities are extremely rare in the 13 songs on “And The Bedlam Broke Loose”. After the opening title track I just thought that this beginning was a little stuffy, but maybe in the long run this album will have one or another nice track. Sadly, these hopes weren’t fulfilled. It’s just forty minutes full of unexciting and well known riffs, few speed changes and zero tension. In case you’re looking for a band with a boring name that plays boring music, visit the band at www.facebook.com/outragepforzheim. Label contact: www.metal-on-metal.com