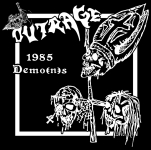 Last year, the German outfit OUTRAGE really bored me with their eighth and latest album “And The Bedlam Broke Loose”. This uninspired album really was a reason not to find out more about that band from Pforzheim, but karma sometimes strikes back. Without further checking out, I again applied to review an album from OUTRAGE, this time a re-release of their oldest stuff. This means I had to listen to a compilation of the first two, back then untitled demo tapes from 1985. And my greatest fears weren’t fulfilled, since OUTRAGE might not have been a real revolution when they started (and soon split up to have a long hiatus). But somehow the raw, blackened and thrashy stuff of these two demos got a grip on me. Especially the four songs from the first demo from September 1985 reminded me of the glorious days of extreme Black and Thrash Metal from Germany. You know, those times when bands like SODOM and KREATOR just started and released their nowadays classic first albums and EPs, derided back then, beloved today. In the case of OUTRAGE, the best possible comparison, or better description, is a mix of the first, blunt and rude SODOM recordings and the style of “Endless Pain” from KREATOR and even the TORMENTOR demo tapes. This means that OUTRAGE were rather limited in musical skills, but managed to create songs that still were charming. Just take the opener ‘Go To Hell’ as an example: the drums were as simple as possible, plain riffing, a break in the style of VENOM and that was enough to create a cool song back then. Or take the final song of that first demo, ‘Death From Behind’: modest playing skills dominate this more than eight minute long song, yet this one has its unique charme. Well, to be honest, it helps a lot if you’re an old geezer like me who grew up in those times to really get mesmerized by the stuff OUTRAGE delivered on their first demo. Younger Metalheads might only hear some dilletantes trying to play some Thrash Metal. Well, to return to “1985 Demo(n)s”, the second demo, released in December 1985, showed OUTRAGE maybe a little bit improved in concern of their skills, yet, they delivered a logical follow-up to the first demo. Still simplicity and rude blackness were the game of the four piece, maybe the acoustic intro piece of the opening ‘The King And The Beast’ was new to the sound of OUTRAGE, as the slightly improved sound of the recording. At least the drums sounded a little more decent here. And the gloomy ‘Warpaint’ is as much my personal highlight as the final ‘Name Your Poison’ with some VENOM vibes again. One thing I can say for sure: if I had heard those recordings back in the time they were recorded, I would have loved this simple, rude and brutal stuff. Even nowadays, 33 years later, it was a joy for me to listen to those “1985 Demo(n)s”. Yet it still is a justified question if there really will be more than a few old geezers like me who really dig this. If you’re my age, you might check www.facebook.com/outragepforzheim or www.vicrecords.com for more information.