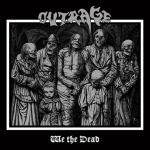 OUTRAGE
We The Dead
(Metal On Metal Records)
47:31min

One of the longest running German Black / Thrash outfits, if you consider the date of its unholy creation, is back with a vengeance and a new infernal aural assault. These guys lived in the glorious days of the first wave of Black Metal when cult acts like HELLHAMMER, SODOM, CELTIC FROST, BULLDOZER, VENOM etc. ruled supreme and most of today’s self-proclaimed "true" hordes still shat in their pants. Unfortunately OUTRAGE didn’t have the luck to come up with an album back in those days. But after a hiatus of 16 years this blackened thrashing force has unleashed some diabolical spawns on a regular basis since 2004. "We The Dead" marks the seventh full length (their demo compilations not included) and it is without any doubts their most mature and strongest release so far. Still sticking to their own unique brand of Black Metal influenced Thrash, Udo (aka Bringer Of Doom) and his comrads in crime just stepped up a notch in the songwriting department and production wise without neither leaving their path nor making any compromises. ’11:59 – Eye For An Eye’ starts with an atmospheric part which turns then into the expected mark ripping, fast thrashing opener. The guitar riffs are sharp like a scalpel that cuts through the flesh and the band takes no prisoners. ‘Kill Snow White’ continues in the same vein but OUTRAGE adds some heavier, doomy parts here as well which won’t be the only exception on this album. ‘The Biggest Wrench’ is again an uptempo old school smasher, fast forward and straight in your face. The lead guitar parts are very interesting here as they have a kind of middle Eastern flair or feel. It seems the band has found their own unique guitar sound on most of the tracks without denying their roots. The basic ingredients are refined with various other elements which add some variety to their songs. Thus the four piece sounds fresh and vital. The drumming pushes the songs always forward giving them the neccessary drive. It’s simple, catchy, well executed and effective. Frank’s raspy and throaty vocals are a perfect match for this soundtrack straight from the deepst abyss. Another style of singing wouldn’t do well here. The sound of "We The Dead" is powerful and has enough punch. A real feast for all maniacs for an excessive headbanging session to unleash the beast. Some other recommendable outbursts are the merciless Thrashers ‘Dead From Behind’ (it breathes the spirit of old SODOM) and ‘Spherical’ as well as the hellish hymn and title track ‘We The Dead’. If you are into timeless old school stuff and the bands mentioned above belong to your alltime playlist then the new twelve tracker by Pforzheim’s fineste might be a good investment. Thrash or get thrashed! www.facebook.com/outragepforzheim, www.metal-on-metal.com