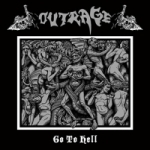 German blackened Thrash Metal act OUTRAGE obviously enjoys some sort of ‘cult’ status among the underground circles – especially in their home country Germany, as it can be assumed. Namely the band was formed almost 30 years ago already (in 1983 precisely); they split up in 1988 – and reformed again in 2004. The band was once again about to call its quit in December 2010, and their last ever concert was scheduled for February 26th 2011. Then a strange thing happened: a savior angel arrived under a disguise of Italian Metal On Metal Records and urged OUTRAGE to continue and not quitting yet. A deal between the label and the band members was soon made – and not too long after that, the OUTRAGE guys found themselves from their rehearsal room, giving some intense kicks to the songs from their past times. "Go To Hell", which is OUTRAGE’s 7th CD-release all in all, contains of twelve re-warmed songs from OUTRAGE’s whole career, surely serves many old fans of the band as some sort of nostalgic trip, letting them to enjoy the band’s filthy, raw and testosterone-oozing – strongly early SODOM, VENOM, BULLDOZER and HELLHAMMER reeking, blackened Thrash Metal, at least for one more album. I am new to them, but that minor thing doesn’t change the fact, I really like how these four German ‘noizemakers’ raise some hell on "Go To Hell". Frank ‘The Voice Of Hell’s raspy and throaty vocals added with the other guys’ hard-boiled determination and loyalty for unleashing the old beast the way it was originally born, have clearly borne fruit on "Go To Hell"; this beast has come out of its old, bone-filled cave back to the daylight – and it’s rasping intensively like a merciless hellhound that is there again, out for blood. There’s truly something unusually tempting and capturing in OUTRAGE’s old school Metal sound that makes one to return to their cave over and over again. Perhaps we might call it some hellish nostalgia that drives many of us back to a memory lane? Well, whatever it is, you really should jump into their cave (just like I did) and loose at least one arm for them. It’s worth it. www.outrage-band.net, www.metal-on-metal.com