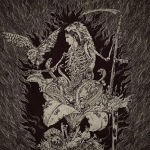 OUTRE is a quite new Black Metal entity hailing from Poland, and after an EP and a split release with THAW in 2013, the lads are now ready with their first full length album, for our listening displeasure. I have it with Black Metal like with most Metal these days, there aren’t many bands or new releases that exite me. Some of the best moments I have with releases are when some old gems are being released on either vinyl or CD, those old dusty demos or forgotten recordings, even some live gigs, that can excite me, together with the odd band or new relase of course. There is still a good deal of great new music being made. I’ve had some trouble getting totally into these guys, musically they are quite happy for the grand masters in MAYHEM, a good mix of both old and a tad newer, actually mashed quite well together, so the music makes great sense and does have the thin red line all the way through. OUTRE creates some good atmospheres and do once in a while get me caught in a trance of darkness and mystery. The songwriting is quite skilled, even though the output isn’t that original, but it shows a great display of musical craftmanshift to make this specific music sound as coherent as this. I don’t think I ever will become a huge fan of this, as it strays a tad of the path I usually enjoy, and if I want some of the older or newer MAYHEM, I’ll rather play that, as that more than satisfies my lust for such. Besides the CD version from Third Eye Temple, there’s a vinyl release planned through Godz Of War Productions and a tape release by Essential Purification Records, so if you miss MAYHEM when they had a bit of teeth left, go check these guys out, you might become surprised and sucked into their universe. Beckon the symbols of bloodswords: www.facebook.com/outremetal, www.thirdeyetemple.com